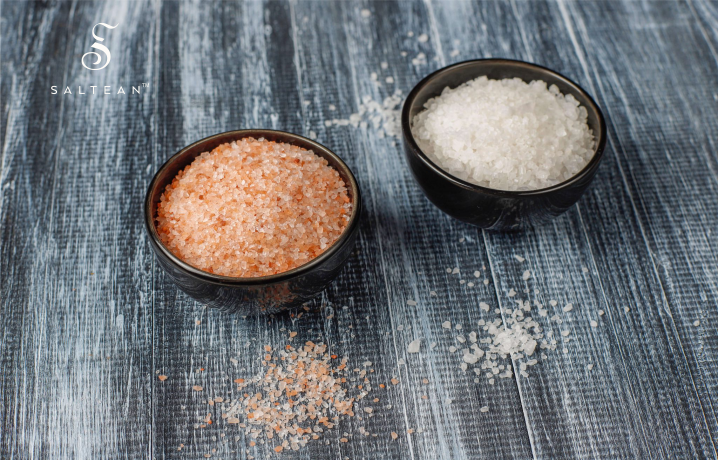 Were you ever told not to salt your meals too much?

Salt, also known as sodium chloride, is a crystalline mineral composed of sodium (Na) and chloride (Cl). It often has a bad reputation because of the health risks associated with eating too much salt, but the study shows that not eating enough salt is also a matter of concern.

Salt aids in performing critical processes in the human body such as delivering electrical impulses, keeping fluid balance, and sustaining muscle function. Salt also acts as a preservative by inhibiting bacterial growth in addition to seasoning your food. Salt is mostly used by adding to daily meals.

The majority of dietary salts are derived from mineral-rich sources such as salt mines and saltwater evaporation. In this article, we are going to talk about sea salt and rock salt.

Though the main components of these two salts are the same, still they are significantly different from each other. Here, we are going to discuss the differences between sea salt and rock salt including their source of origin, how they are obtained, their texture, color, and taste, and how they can be used. So, let’s get started.

The source of the salts and how they are obtained from these sources impart some specific characteristics to them. To learn more about Himalayan salt and sea salt, we will start by looking into their sources and method of extraction.

Himalayan pink salt is hand-mined from the world’s second-largest salt mine called Khewra salt mine located in Pakistan. This salt has a distinct hue and flavor. Its brilliant color is due to the traces of minerals present in it. These salt deposits are millions of years old and remain protected under rocks and lava. Old hand mining techniques are used to extract pink rock salt from the mines in the form of large blocks.

As evident from the name, sea salt is obtained from the evaporated seawater of oceans located in different regions of the world. It is collected from seashores in the form of crystals or made by washing off the brine. There are different types of sea salt available that differ due to the seawater from where they are collected.

Minerals including calcium, iron, magnesium, potassium, and many others are found in Himalayan rock salt crystals. Himalayan salt is one of the purest salt with less sodium than traditional table salt. While it may contain some iodine, it is usually insignificant in comparison to iodized salts.

While different types of salts have varying levels of trace minerals, there are few additional nutritional differences among them. Himalayan salt is said to contain more trace minerals than sea salt of different types. It contains more than 80 minerals in traces that are good for the human health.

Sea salt contains potassium, iron, and zinc and is made by evaporating seawater. Darker sea salts have a larger concentration of contaminants and trace minerals, which can impact the salt’s flavor but not necessarily its nutritional worth.

While many dietitians prefer sea salt because it is less refined, it may contain trace levels of heavy metals and microplastics due to ocean contamination. Some experts believe that the hazards of microplastics in foods are negligible at this time, but additional research is needed to establish this.

Cooking with pink Himalayan salt not only enhances the flavor of the dishes but also adds essential minerals. It is unprocessed and unpolluted and has all the essential nutrients and minerals intact making it more nutritious.

Himalayan salt contains trace minerals that can get absorbed by the body at the cellular level without changing the metabolism process. Himalayan salt provides the body with many essential minerals and micronutrients when taken daily.

This salt is considered one of the purest salts as it is handpicked from salt deposits and is not treated with additives and chemicals. This allows only the purest form of particles to enter your body devoid of any impurities.

If you have seen Himalayan salt in any form then you must know that this salt has a pink color with an orange tint. This distinctive feature of Himalayan salt is because of the traces of iron oxide present in it. The color of rock salt crystals varies from light pink to dark pink.

Sea salt color varies according to the seawater from which it is extracted. The color of sea salt could be pure white, light grey, or white with a slightly black hue.

Himalayan salt is unrefined and additive-free that is why it has a very subtle and raw salty flavor. You can even use it as finishing salt because of its fine saltiness.

Sea salt contains a variety of minerals and traces elements due to its extraction from seawater. Mineral content in sea salt is balanced, resulting in a more delicate and refined flavor.

Evaporation of ocean water and water from sea lakes produces sea salt. Depending on the water from which it is harvested, it requires little processing as a result the amount of trace minerals such as magnesium, calcium, and potassium also changes. It has a coarse texture as a result of this processing.

Himalayan salt is made up of highly compact crystals that come in fine and coarse grains. Because of the intrinsic grain diversity in pink salt, it is used in a wide range of food applications (snacks, bread products, dairy, herb mixes, recipe mixes, etc.). You will also find crystals of Himalayan salt in shakers and grinders.

Summary
These two salts are significantly different from each other based on color but their texture and taste are more or less the same.

Is Himalayan Pink Salt Better For You Than Sea Salt?

Now you must be wondering, what is better for you, pink Himalayan salt or sea salt? Well, both these salts have common and some different uses and characteristics. Based on the purity of Himalayan salt, we would recommend using it for edible purposes.

This salt has more trace minerals than sea salt and also does not go through any kind of refining and processing. You will get this in unaltered form in store. You will find Himalayan salt in extra-fine, fine, and coarse grains to meet different cooking requirements.

Now, you know a lot about Himalayan salt and sea salt, so it depends on you to choose the right salt for daily consumption.