Himalayan Salt Inhaler – Everything You Need To Know 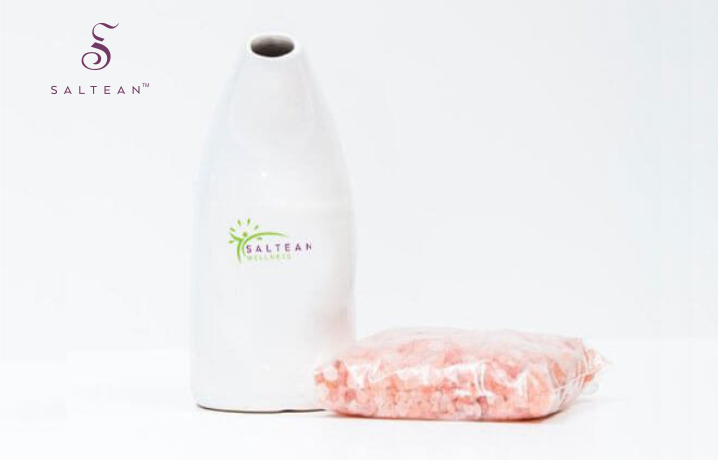 Since ancient times, people have been using salt therapy to treat different respiratory issues. Many doctors also recommend their patients to use Himalayan crystal salt inhalers, sit in the salt rooms, and visit the beach to inhale salty air to treat asthma, allergies, and other respiratory issues. The Himalayan salt inhalers are very handy and you can use them anywhere anytime. These inhalers are the most convenient way to get the benefits of salt therapy. Read along to learn about the benefits of Himalayan salt inhaler and other interesting facts but before that let’s see what salt therapy is?

What Is Salt Therapy?

The basic principle of dry salt therapy, also known as halotherapy, is to breathe fine salt particles to treat respiratory problems. Not only that, but sitting in the salt rooms also moisturizes your skin and makes it youthful and younger-looking.

Salt therapy was discovered in the 1800s in Eastern Europe in the Wieliczka mine. It was Dr. Felix Bochkowsky who observed that the miners who spent most of their time in salt mines had better respiratory health than the people who didn’t have any exposure to the dry salty air. And that’s how the mine was later converted to a health resort.

Even before that, the ancient Greeks used to sit in salt caves filled with salty air to treat different respiratory ailments.

As you may know, our current environment is full of harmful positive ions emitted by the electronics, such as TV, laptops, computers, etc. The Himalayan salt crystals emit beneficial negative ions in the surroundings to offer therapeutic and healing benefits.

Upon absorption by the body, these negative ions heal the wounds courtesy of the inherent anti-fungal, antibacterial and antiseptic properties. Furthermore, the salt particles enter your lungs to clear congestion, hay fever, common cold, asthma, and other sinus allergies

Summary
Inhaling fine salt particles dispersed in salt rooms and caves helps treat many respiratory issues due to their antibacterial and antiseptic properties.

People worldwide have been using salt therapy or salt rooms to treat different respiratory problems for more than 200 years.

Even if you’re not asthmatic, you can still reap the following benefits of the Himalayan salt inhalers:

Pink salt crystals effectively draw the water from the airway for further thinning of the mucous. This way, it becomes easier to clear and remove the mucus to facilitate breathing.

Similarly, the antiseptic properties of the Himalayan salt inhaler minimize inflammation by removing the mucus—this way, the salt inhalers offer temporary relief from the congestion and make breathing easier and comfortable.

As mentioned earlier, the negative ions are responsible for a chemical reaction to boost the serotonin levels within the body that improve mood and alleviate stress.

Salt therapy not only removes the mucus but also other irritants and pathogens from the body thus detoxifying the body.

Salt therapy reduces our stress levels and clears the airways to offer peaceful sleep. It becomes relatively easier to fall asleep once the anxiety and stress levels are reduced.

Summary
The negative ions have a positive effect on our minds and body. When you inhale minute salt particles through Himalayan salt inhalers, it helps thinning and removing mucus along with foreign particles, also relieves stress, improves mood and sleeping patterns.

How To Use A Himalayan Salt Inhaler?

A Himalayan sea salt inhaler, also known as the salt pipe, has a cylindrical body with a narrow beak-like opening and a flat bottom. All you need to do is inhale the Himalayan rock salt from the opening, so the moisture in the nostrils picks the tiny salt crystals. Later, these microscopic crystals travel via the windpipe to your lungs.

Make sure to use only Himalayan salt for this inhaler. This salt is found in the Khewra salt mines of Punjab, Pakistan. It offers maximum benefits because of the additional vital minerals present in it, including calcium, iron, magnesium, potassium, and many more.

As the pink rock salt particles pass through the respiratory system, the moisture absorbs the salt particles and creates a salt room-like atmosphere inside. This way, the salt particles draw out the pollutants, dirt, dust, and other microbes while passing through the mouth, sinus, nasal cavity, and lungs. You can use a Himalayan salt inhaler for 10 to 15 minutes daily to reap the maximum healing benefits.

It’s important to ensure the salt in the inhaler doesn’t get moist. In such a case, you need to replace the salt inside the inhaler with fresh and dry salt crystals. Just like salt inhalers, neti pots are also used to clear the airways and sinus. The mechanism of neti pots is quite different from salt inhalers.

However, you should know that salt therapy isn’t a permanent or alternative solution to congestion and other respiratory issues. Instead, it’s a natural remedy to minimize these symptoms and provide temporary relief.

Summary
Inhale pink salt particles through a beak-like opening of the salt inhaler that comes pre-filled with Himalayan salt. The salt particles go through the airways and reach the lungs. This way, it relieves symptoms of many respiratory conditions.

The Himalayan crystal salt inhaler combines modern and ancient salt therapy techniques to offer a hassle-free and drug-free solution to treat respiratory issues. In addition to treating respiratory problems, you can enjoy other wellness benefits of Himalayan salt inhaler such as reduced stress and inflammation, and of course, better breathing.